Spoilers Ahead, You Sure Wanna See Them?
The content below contains major unmarked spoilers. Don't say we didn't warn you, Captain~
Cocolia 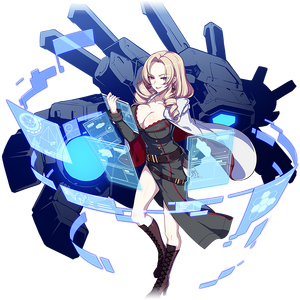 Cocolia is the owner of Cocolia's Orphanage and currently detained by Anti-Entropy after the events in the Deep.

Cocolia is a commander and enforcer in the organization Anti-Entropy. She is also the caretaker and namesake of the Cocolia Orphanage. As such, she is the foster mother of several characters, including Sin Mal, Rozaliya and Liliya Olenyeva, Bronya Zaychik, and Seele Vollerei.

Cocolia was a captain in the Red Army serving in a Siberian military outpost preceding the events of the second Honkai war. During this time she confronted Colonel Alexey Zaychik after catching him in the act of stealing weapons to sell on the black market. She attempted to report him to their superiors but was instead found guilty of "attacking" the Colonel. When Alexey came to visit Cocolia in her holding cell, after having a discussion about the reasons behind his actions, as he was leaving Alexey was killed by a Honkai beast that had destroyed the building. Cocolia used this as a chance to escape. Alexy used his last breath to give the car key to Cocolia to save his wife and unborn child, which she wasn't planning to do. To her dismay, she encountered Alexey's pregnant wife Alexandra in his car. To save time, she threatened Alexandra with the gun to keep her still, then proceeded to drive off with her "hostage". They ended up being some of the few residents to survive the event.