Spoilers Ahead, You Sure Wanna See Them?
The content below contains major unmarked spoilers. Don't say we didn't warn you, Captain~
Durandal 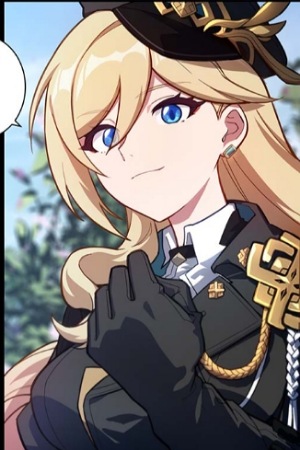 Durandal is a very beautiful woman who is voluptuous in appearance and possesses regal beauty. She has voluminous, wavy blonde hair fading into a coral pink at the bottom which descends past her waist and is rather wild in its own way. It is usually left loose, but the Battlesuit, Dea Anchora depicts her hair tied up in a high ponytail. She possesses deep blue eyes along with a slim but fit figure. Durandal uses lances in battle.

Durandal was shown to be mature, quick at making decisions, and a little hot-headed when she was 12. Theresa states how she would often lecture senior officers on the importance of hard work whenever they tried to take a break, much to her dismay. She is also somewhat gullible. As she fell for Kiana and Theresa’s “vacation” excuse when they ratted her out to Anti-Entropy to buy time.

Durandal is very serious about her work as a high-ranking officer and Valkyrja within the Schicksal organization. However, she is also an understanding person as she asked Rita to let Fu Hua go during their battle. Durandal understood that Fu Hua is fighting for the ones she wants to protect and mentioned she would do the same if put in a similar situation.

Durandal is overall a kind, compassionate and hardworking person who is dedicated to saving lives and her duty as a Valkyrja.

Sometime in 2000, Bianka was born and later found herself in a terrible situation. A Honkai outbreak struck her hometown and destroyed almost everything. However, she managed to survive due to her natural resistance to Honkai energy. Tragically, Bianka only remembered one thing after the catastrophy: her own name.

Later, Bianka was sent to an orphanage. Because she no longer remembered anything about herself except for her name, the people who ran the orphanage randomly chose January 1, 2000 as her birthday.

In the summer of 2010, Ragna, the commander of the Vanguard (aka Stormtrooper), visited the orphanage to help relieve the sorrow of those affected by Honkai Outbreak. The presence of this woman shed light on many orphans, including Bianka. Because of that, Bianka was expecting her to come back when the lilies Ragna and the orphans planted together at the orphanage have fully bloomed.

Spring 2011, Ragna did not come back as she had died in a battle. In her stead, Himeko visited the orphanage. Although Bianka hated her at first due to how different she was compared to the friendly attitude of Ragna, she quickly changed her mind when Himeko told her about the tragedy.

Bianka decided to become a strong Valkyrja as soon as possible. However, the slow and relaxed pace of the training in St. Freya Academy led her to the Schicksal HQ. Bianka then quickly became a A-Rank Valkyrja at the age of 12.

Bianka and Rita were sent on a mission to the Sea of Quantum on February 29th, 2012. Four years later, Bianka is shown to be using the name "Durandal" from a sword they met during the mission.

As mentioned by Theresa, Himeko, and Fu Hua in the game storyline, Durandal is currently the strongest S-Rank Valkyrja in Schicksal. Theresa mentioned the other two S-Ranks are strong due to their natural talents but Durandal is different because she relies on pure hard work.

Her weapon is the Black Abyss White Flower which was previously wielded by the two most powerful Valkyrja ever known by Schicksal, the late Cecilia Schariac (Kiana Kaslana's mother) and Reanna Brigantia.

It has two forms; the Javelin form which controls decomposition, and the Lance which provides living things with regeneration and recovery.

The lance form is usually used, and the javelin form has yet to be seen.

As the fight between Fu Hua and Rita ensued, Durandal made her first appearance and interfered in the heated battle. Earlier, Fu Hua had overheard from Otto on how Theresa and the others were fighting against Sirin in K423's body and tried to leave, but Rita stopped her and told her not to interfere with Otto's plans. Fu Hua realized Rita was stalling the battle and both parties were about to start fighting seriously.

Durandal stopped their fight before it could get worse and told Rita to let Fu Hua go as she understood the concept of fighting for the ones she wanted to protect. Rita then asked Durandal why she let Fu Hua go because she could die if she went there, and Durandal said that it was also Fu Hua's own choice.