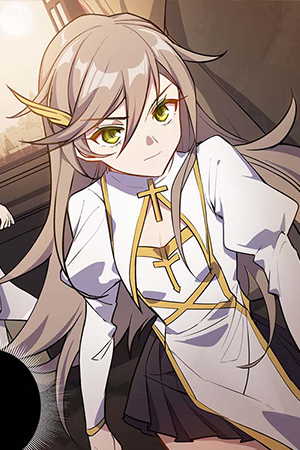 Eleanor Schariac was a former member of House Schariac and a valkyrie of Schicksal after the Black Plague, and the first known Current Era user of the Abyss Flower.

Eleanor was a fair skinned young lady with long ivory hair and lime-colored eyes. As a valkyrie leader, she wore the same white and gold-lined battle attire over her priestess clothes, a black skirt, and thigh-high white leggings, while a small, golden wing headpiece adorned the right side of her head.

Because Otto had saved her life, Eleanor was completely devoted and loyal to him, which in turn, meant absolute reverence for the Church and Schicksal as a whole. This faith made her rather ruthless and cold, determined to carry out orders regardless of their moral bases. In the end, these ambitions and desire to impress Otto, made her vehemently hate Kallen, who despite being her superior, was always deemed incompetant and undeserving of Otto’s attention by Eleanor.

When the Plague, which was honkai manifested as a disease, hit Europe, Eleanor was one of the infected that would be “treated” by Otto, who injected a serum into her to see if it was effective. Miraculous it was, and had also increased Eleanor’s resistance, which would later help her join Schicksal as a valkyrie. Sometime between the Plague and the events in 1476, Eleanor also became the wielder of Abyss Flower’s Black Spear. After her death, her body was preserved by Otto, who would research it to find how to create a new Valkyrie Order with valkyries more like Eleanor.

After Victor’s residence was robbed by the “Rogue Extraordinaire”, Eleanor arrives on the scene with Kallen to investigate the crime. However, Kallen, being the real culprit, doesn’t take the task seriously which frustrates Eleanor, especially hearing Kallen sympathize with the “heretics.” Eventually the two argued over the sanctity of their Church, leading to Eleanor storming out in a huff when Kallen pointed out that the people didn’t deserve to suffer for her own defeat in the conquest.

Later, Eleanor brought two of her valkyries to confront Kallen, who was in Rogue Extraordinaire attire, exposing the other’s disguise at the basement experiments. Kallen tries to explain why experimenting on innocents was wrong, but Eleanor refuses to hear reason over her loyalty, attacking Kallen, who kept evading her multi-knives. After finally getting a kick to her stomach, Eleanor is forced to catch her breath before summoning Abyss Flower’s Black Spear. Against the defenseless and weaponless Kallen, the Spear’s fumes made quick work of injuring Kallen to the point that she wasn’t even able to stand her ground. Eleanor then prepares to drive the spear through Kallen, once and for all, but Otto stops her, grabbing the spear with his bare hands. Afraid that she had wounded Otto, Eleanor immediately stops and agrees to locking Kallen up, before frantically calling for a medic when Otto passes out.

Some time later at the Cathedral, Eleanor is instructed to extract the contents of the Black Box, in which she does with concentrated use of Abyss Flower’s Black Spear. However, before the Overseer could explore the extracted core’s powers, the Oath of Judah comes barrelling through the Cathedral's window as Kallen faces off against Eleanor again. Furious at Kallen’s continued heresy, Eleanor attacks Kallen with the Black Spear again. However, Kallen now brought her own divine key, keeping Eleanor at bay with the chains of Judah before disarming her. In a last ditch effort to reach for more power, Eleanor reveals that she had been conversing with the entity in the core extracted from the Box. With that, she absorbs it, becoming a pseudo-herrscher. Yet, even in this form, she was unable to defeat Kallen’s use of Judah. With her bound and immobilized by the divine key, Eleanor refuses to accept defeat, believing that Kallen had to die for Otto’s safety, so she attempts to strike Kallen from behind by emitting her pseudo-core. Otto, though, was quicker, and through the use of Void Archives’ powers, he manifested a mimicry of Shamash, shattering her pseudo-core and fatallying wounding her as the Oath of Judah finishes draining her of her honkai energy. In her final moments, Eleanor is in tears as she questions why Otto had shot her when she could have done so much more for him in her years of servitude.