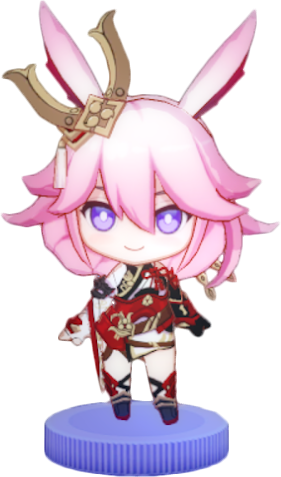 Background Information
Date of Birth: July 22
Height: 194cm (including ears)
Gender: Female
Weight: 56kg
Organization: --
Birthplace: Far East
Battlesuit Details
Yae Sakura assumed this form under the influence of Higokumaru in the Stigmata Space.
Her Miko outfit was replaced by a deep red armor. Her long hair was also tied up for improved combat performance. This outfit makes her look more like a bushi warrior than a miko.
Battlesuit Details
Yae Sakura had never left the village nor studied kenjutsu with a true master. Her fighting style is best described as a Garyu (self-inspired) stance.
Nevertheless, Yae Sakura could wield her tachi and wakizashi with surprising skill to deal devastating blows. Perhaps this was made possible through Higokumaru's powers. Such mastery could only be witnessed in the Stigmata Space.
Battlesuit Details
Yae Sakura eventually chose to stay in the Stigmata Space forever. 500 years had passed. Those she had hated and those she had loved no longer exist.
The dreamscape of Yae Village is the only place familiar to her in this strange world.