< Herrscher of the Void
Edit

Spoilers Ahead, You Sure Wanna See Them?
The content below contains major unmarked spoilers. Don't say we didn't warn you, Captain~
Herrscher of the Void 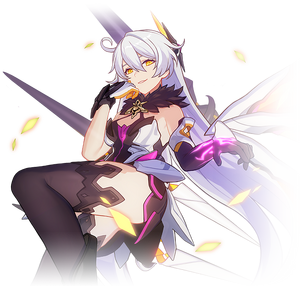 Herrscher of the Void persona, also referred to as Sirin, was one of the main antagonists of Honkai Impact 3rd, born out of Sirin's hatred towards humanity. She was fighting with Kiana Kaslana over control of the latter's body.

Compared to Sirin, Herrscher of the Void persona was more mature, much more calm and composed, and regal. Yet despite her calm appearance, she still has a seething, raging, anger for humanity underneath. She enjoyed seeing humanity suffer, viewing normal humans as being beneath her—taking joy in utterly overpowering them and reveling in their helplessness. However, because of this, she was also quickly shocked and angered when someone exceeds her expectations.

She was prideful and self-centered, seeing even the Herrscher of Domination as nothing but a toy to let her take control once again.

In contrast to most of the other Herrscher personas, Kiana's alter hated her host and wanted to destroy everything she holds dear, using words to mentally weaken Kiana on every occasion.

Her only interest appeared to be only retrieving Sirin's gems and destroying humanity.