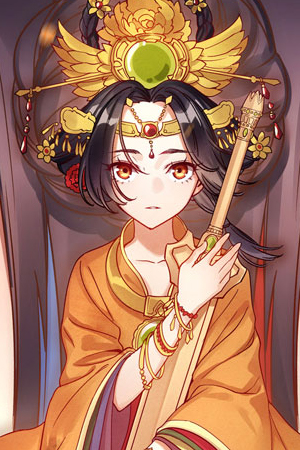 Ji Xuanyuan was the wielder of the 10th Divine Key, the Xuanyuan Sword. She was also the Yellow Empress of Shenzhou.

Ji Xuanyuan appears as a short young woman. In her normal attire, she wears a detailed orange dress with her dark hair being styled in an intricate hairstyle with many ornaments. She also has amber eyes. While corrupted, her hair is much shorter, with her dress becoming simpler and sleek. Her eyes are also paler than usual, glowing red when agitated.

Ji Xuanyuan appeared to be brave and strong even in the face of grave dangers.

Not much is known about the history of Ji Xuanyuan. She was a mysterious young girl and the first recorded human with powers strong enough to fight the Honkai, which appeared for the first time in 2717 BC.[1] At some point, she rose to the title of Empress. She also became acquainted with Shennong and the three Pioneers of Project EMBER: Fu Hua and the twins Nuwa and Fuxi. During the Previous Era, just before the civilization fell, the twins were tasked by Dr. MEI to safeguard a Divine Key sword until the time was right:[2] they traveled the land until they met Xuanyuan and gave her the sword, awakening her natural stigmata in the process.[3] Due to the technological progression of the civilization, however, the first Judgment-class Honkai Beast of the Current Era, Chiyou, appeared in a place in Shenzhou that was called the Nine Realms. Nuwa and Fuxi gave their lifes to defeat the beast and Ji Xuanyuan stayed inside Chiyou's belly to guard the ancient seals to keep it under control, although she became corrupted in the process. Afterwards, due to her disappearance, her stigmata, weapon and even her person became only a part of legends that would be spread among the people of Shenzhou.

Thousands of years later after Xuanyuan's sacrifice, the Valkyrie Squad V led by Murata Himeko consisting of Kiana Kaslana, Raiden Mei and Bronya Zaychik managed to defeat the beast Chiyou with the help from the Empress, who enchanted their weapons, freeing Xuanyuan from her eternal loneliness in the process. They were also able to retrieve the Divine Key. The Empress expressed gratitude before finally departing.