Spoilers Ahead, You Sure Wanna See Them?
The content below contains major unmarked spoilers. Don't say we didn't warn you, Captain~
Murata Himeko 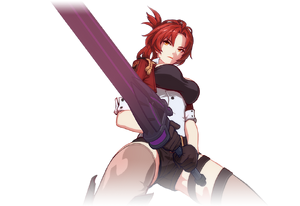 Himeko is known as the Ace of the Far East Branch and was formerly the Captain of the Hyperion.

Himeko is a tall woman with red hair done in a somewhat messy, wavy updo with parted bangs, though her hairstyle changes depending on the battlesuit/costume. She also has yellow eyes and fair skin. She utilizes greatswords as her primary weapon in battle.

As an officer from Schicksal organization, Himeko takes her job very seriously. She considers herself a warrior who fights Honkai beasts and protects innocent lives. Himeko is very headstrong, to the point where some may consider her reckless. She will go out of her way to act strong in front of her comrades to inspire them to keep fighting. Himeko is also considered a genius, as she graduated high school at the top of her class.

Outside of work, though, Himeko is quite lazy and messy, a fact only known by those close to her. Evident by the fact that prior to Kiana, Mei, and Bronya moving in, her apartment was so dirty it can only be described as a dump site by Kiana. Her competency at work is also often questioned by Theresa and her closest subordinate, which the former states that Himeko often drinks at work. Her recklessness is also considered her greatest weakness, which Theresa warns will one day become Himeko’s downfall.

Himeko is quite an alcoholic, and would often drink at work. She would often climb up to Kiana’s bed after a drunk night out at the bar, much to the latter's dismay. Himeko is also considered a hopeless romantic, as her relationships never end well, usually due to work. Despite this, she is determined in finding a partner before her time runs out.

Underneath her headstrong persona, Himeko is a caring individual who worries about her comrades. Secretly, she ponders about the future of her students (especially the Squad V members,) and worries what will happen to them if she’s not around anymore.

Despite all that, Himeko is dedicated to her job and protecting the ones she care about, and she would never hesitate risking her own life in order to save another.

Because Himeko doesn't have Honkai resistance from birth, she was transplanted with artificial stigmata developed by Schicksal. As a result, her body is now able to equip the Nexus Armor but at the cost of her lifespan.

In 2010, the Valkyrie Assault Squad was nearly annihilated in a mission. Her teacher, Ragna, also died in that mission. The Squad was disbanded never re-established.

Nuclear Fusion Armor is the one of the many prototype god killer armors made by Destiny that improved overall durability and gives the wearer a high amount of electrical energy at the cost of own lifespan.

Himeko used this armor for the first time to fight against the 3rd Herrscher in the manga.

When she picked up the Xuanyuan Sword, she became a zombie controlled by the Honkai's will that was contained within the sword. Kiana managed to take down Himeko and reconciled the Honkai's will inside the sword using her pure soul.