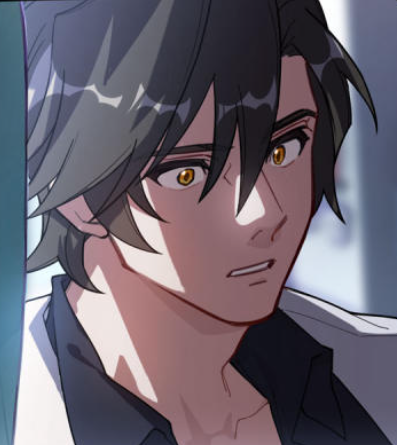 Murata Ryusuke was the main antagonist of Alien Space manga. He was the director of Schicksal's St. 7308 Labs and the father of Murata Himeko. He was also the human companion to the Sugars, Pepper Mint.

Ryusuke was a dark haired man with amber eyes. As a lab director, Ryusuke always had his professional attire on, consisting of a white lab coat over a simple black dress shirt and gray pants. under his collar, hangs a tied, violet necklace with a small gemstone outlined with a silver case.

When he assumed the Sugar Gestalt’s form, his right hand became overwhelmed by the Gestalt’s dark green carapace, with teal tentacles stemming from his back and a singular sharp claw attached to his right hand. His eyes had inverted while a dark mark stemmed from the middle of his face, over his nose, and around his left cheek.

The older Murata had always been incredibly passionate about his work and belief on how space expansion would save humanity. He had always had a fascination with aliens, which soon grew into an obsession. Ryusuke had once been a caring father for Himeko, but something in him had broken ever since his wife had died when he chose to pursue his work instead of being by her side when she had been ill. Because of her death, Ryusuke’s obsession to see his dream through, only grew to the point that he became willing to sacrifice anything to make his dream a reality - even his own daughter.

Sometime after the Second Eruption in 2000, Ryusuke had been invited by Otto Apocalypse for the leading position at St. 7308 Labs, after spending some years as a university professor. Ryusuke originally wasn’t interested until Otto mentioned that he would be working with the 4th Divine Key of their Previous Era, in order to repair damages done to Siberia after the 2nd Honkai War. Soon after, Ryusuke reached a critical point in these efforts, but his wife fell ill and it wasn’t long after, when he was encouraged to continue his research, did she die. After her death, Ryusuke becomes the host to Pepper Mint, a Sugar on a mission after Molass went missing that year with her own host, when he demonstrated unwavering conviction in aliens and dedication to his dream even after being denied by his peers.

In April 2005, Ryusuke visited his daughter’s graduation ceremony in the Far East, applauding her feat and asking which university she would study at now. Himeko replies enthusiastically that her interest is in aerospace and that she would soon attend Caltech. Months later, the 4th Divine Key had restored most of the Siberian terrain after 6 months of continuous efforts. Seeing as how the key needed to be taken down for maintenance, Ryuske requests some time off to visit Himeko in Los Angeles. Wary because America was in Anti-Entropy's jurisdiction, Otto analyzed Ryusuke for any hint of deception with his Fenghuang Down mimicry, before approving of Ryusuke’s leave. It is revealed here that Ryusuke did lie, as Pepper Mint swallowed the mimicry feather. Prior to this, Ryusuke had slipped an encrypted message into the batch of intel from Schicksal to AE, in their awkward era of truce. This message warned Tesla and Einstein that Otto was planning to use the 4th Divine Key to organize an attack on AE’s territory, and as the lab director in charge of it, he could testify. In the message, he would help AE deflect the attack, in exchange for asylum and escape from Schicksal.

Later at night, in the LAX (Los Angeles International Airport), Ryusuke meets with Einstein and Tesla, after the two ensured the Schicksal scientist wasn’t being tailed. Ryusuke then offers them proof by revealing the device needed to access the Divine Key and a detailed confidential document of Schicksal’s coordinated plans. In a show of goodwill, Ryusuke leaves the device in the two AE enforcers’ hands, going off to see his daughter. At Caltech, Ryusuke snaps a picture of Himeko and Welt, who were in the middle of discussing meatoric sightseeing. Ryusuke and Welt, however, immediately sense the inhuman power levels in one another, becoming cautious but not exposing themselves when Himeko was nearby. It is here that Ryusuke reveals that Himeko believes him to be a physicist at a research institute in Europe. Himeko then takes her dad out to eat around the city, however, the 4th Divine Key soon activates and begins stirring a hurricane that would devastate the U.S East Coast. Trusting in Ryusuke, AE calls Ryusuke to their base, in which he quickly excused himself from the lunch with his daughter, to attend. Tesla needed Ryusuke’s help to pinpoint the 4th Divine Key, so she’ll blast it to smithereens with their Silver bullets. At the same time, the Sky People had deployed their spy bot to the AE New Mexico base which soon infects some of their soldiers. Realizing this, Rysuke and Tesla split as they deal with the mind-controlled separately, with Tesla getting aid from Welt, unbeknownst to Ryusuke. Unfortunately for them, the spy bots did manage to slip a virus into the system, locking them out. Tesla, though, claims she only needs two days to undo it, and tells Ryusuke to get himself treated as he had suffered from some wounds. A little while later, it is revealed that Ryusuke and Pepper Mint planned on getting their hands on the Silver Bullet launch system so they could blast Asteroid 439, which was actually a Sky People Vanguard Stone.

Meanwhile, Ryusuke has gone to his daughter’s residence to meet with her for dinner, but Welt uses the moment to corner him for more info on the strange instances and the spy bot he manage to capture in his Star of Eden. However, Himeko then shows up, surprised at Welt’s appearance, but invites him in regardless, successfully stopping her substitute professor and her father's tense confrontation. After the very very spicy dinner, Ryusuke and Welt head to the balcony to talk in private, and Ryusuke reveals to Welt the existence of the Sugars and Pepper Mint. Pepper Mint then invites the two into the Candy Jar, which is the nomadic home of the Sugars, to prove to Welt their existence and the threat of the Sky People. However, after the two return to the real world, they discover that Himeko had been attacked by a spy bot.

Later at the AE’s medical facility, Ryusuke is informed that the doctors had managed to remove the spy bot but could not stop the spread of her infected cells. Ryusuke then insists to AE that he would do anything to stop it, leading to Tesla and Einstein to agree to send him and Welt into space with the Arahato to destroy the Vanguard Stone. Using the 4th Divine Key to counter the Vanguard Stone’s disruption, Ryusuke was able to drive Welt right up to the Stone and have him destroy it with his Reason Manifested arsenal. After the two succeed, Ryusuke marvels at their home planet’s beauty before asking Welt if humanity had seemingly gotten too attached to their home planet. Welt agrees that space travel is likely in the future but dissents from preparing for it now. Ryusuke then reveals Project Ark of the Previous Era and its blueprints, claiming that if AE was able to lend him a hand, they would quickly replicate the shuttle needed for space travel. However, Welt believes the costs of the project would be too high in the present, and Ryusuke becomes frustrated at Welt’s “cowardice” to take these risks. He calls him a failure of humanity’s leader and when Pepper Mint tried to calm him, Ryusuke crushes his Sugar companion and absorbs its powers, becoming the Sugars’ Gestalt.

When Welt demanded why he would betray Pepper Mint’s trust, Ryusuke replies that he had completed his end of their deal, by stopping the Sky People’s Vanguard Stone, so it was Pepper Mint’s turn to fulfill his, allowing Ryusuke to do whatever he wanted. It is then revealed that Ryusuke had been the one who had intentionally triggered the 4th Divine Key to unleash the attack on U.S coastlines and not Otto, whereby there was never such plans in the first place. When they had entered the Candy Jar, Ryusuke had also intentionally revealed their location to the Stone, allowing the Sky People to attack Himeko. This, and his protective father act, allowed him to corner Welt, who’s Reason powers he coveted. Ryusuke, after years of working with the 4th Divine Key with constant honkai exposure, had weakened his body greatly and been one of the main reasons why Otto had let Ryusuke go. Ryusuke had then planned to have the Reason powers restore his broken body. At these revelations, Welt becomes enraged, taking up Ryusuke in his battle. However, Ryusuke sends Welt to the Candy Jar, using the Alien Key, a divine key of the Sugars after their fight with the Honkai. Ryusuke believes that with the Key he is always on a higher dimensional level than Welt, which enables him to see the plane’s true nature and coordinate attacks that wouldn’t make much sense in Welt’s perception of the plane. Even after severing Welt into pieces though, Welt is able to regroup and retaliate after he touches the true reality as the Herrscher of Reason, entering Ryusuke’s higher dimension, and seeing the dimension in its true form. Ryusuke dies finally after Welt uses the Star of Eden’s 3rd Power, Singularity Rebuild, which undoes the dimension and breaking the Alien Key.