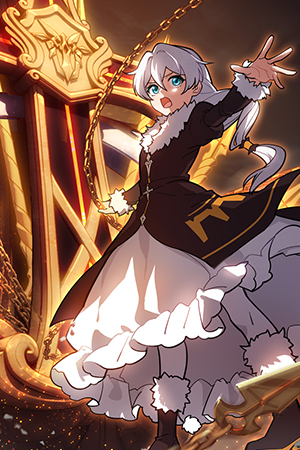 Theresa Apocalypse is a clone made from the DNA of Kallen Kaslana and a Honkai Beast named Vishnu. She is also the principal of St. Freya Academy and the World's Cutest Valkyrie (in her words).

Spoilers Ahead, You Sure Wanna See Them?
The content below contains major unmarked spoilers. Don't say we didn't warn you, Captain~

With the claim of "World's Cutest Valkyrie", Theresa does live up to her self professed title. As a clone made by Otto Apocalypse from Kallen Kaslana's genes, Theresa takes after her with white hair and bright blue eyes. Due to the cloning experiment, she is not able to physically grow and she is stuck looking like a 12 years old girl, making her the shortest of the characters. Her choice of clothing is generally cute and frilly to match, though she keeps her waist-length white hair in a more mature low side ponytail most of the time. She will change her hairstyle to double buns or pigtails sometimes, with decorative hair ornaments to match her outfit.

She has a similar personality and attitude as Kallen, which made Otto originally believe she could truly be her reincarnation. She is kind and cares about the well-being of others, though she can also be stubborn. While she does have a somewhat mature personality, she does display a fondness for child-like things (sweets, HOMU) and many of her battle phrases involve her calling herself cute or insulting the enemy. Sometimes she also uses her cute appearance to her advantage. Despite her occasional immaturity, she is a very capable principal of St. Freya High and will do anything to ensure her student's safety.

Theresa, originally called A-310, was one in the A3 clone series made in an attempt by Otto Apocalypse to resurrect Kallen Kaslana in 1972. The previous A1 and A2 clones had melted, so Otto then decided to incorporate the genes of a Honkai beast called Vishnu, which had incredible regenerative powers. These clones, the A3 series, did survive but they would stop aging around twelve years of age. A-310 was one such clone, who was put through a series of mostly unreasonable tests by Otto alongside the rest of her batch to determine who would become "the real Kallen". A-310 won begrudgingly, though she decided to spare the opposing clone, A-303 and granted her mercy. Otto decided that, while A-310 was certainly similar to Kallen, that she was her own person and not his childhood love reborn, thus he named her Theresa and adopted her as his own granddaughter. On December 24th, 1973, the then, B-rank Theresa had been dispatched on her first combat mission and had defeated Parvati who was more than a "chariot-level" threat when Schicksal had diagnosed it.

Fast forward to the Second Eruption (2000) and Theresa is an S Rank Valkyrie of Schicksal. As a part of a genetic experiment that Otto more or less doesn't want people to know the details of, many did avoid her but eventually she was able to get close to a few valkyries, including Cecilia Shariac, the mother of Kiana Kaslana. She and Cecilia are best friends, and after Cecilia's separation with Siegfried, opted to help the two to reunite with some of Cecilia's other companions. When Kiana was born, Theresa began referring to herself as Kiana's aunt. During the Second Eruption, Theresa is one of the first Valkyries to come into contact with Sirin, who initially tries to win Theresa over on account that she believes them both to be children who have been mistreated by Schicksal. After this plan falls through, the two skirmishes before Sirin impales Theresa on one of her void lances. Luckily, Welt Yang had broken into the dimension with Siegfried and Kaslana had quickly escaped with her while Welt dealt with Sirin. A while later, Otto reveals that Oath of Judah, Theresa's divine key weapon, had a 0th ability that nullifies honkai, and could potentially kill her if she didn't know how to wield it right. Fast forward again and Theresa is re-matching with Sirin, expertly wielding Judah's 0th against Sirin, which immediately incapacitated Sirin. Wielding a spear of Judah, Theresa murmurs her apologies for having no other choice as she stabs Sirin through the heart. Theresa, thinking Sirin is dead from the lethal blow, decides to deactivate the ability and pull her spear out after a short time, exhausted from the toil that Judah's 0th had one her. This, however, allows Sirin to synergize with her Gem of Serenity, to heal herself and come back. Theresa is then removed from the events of the Second Eruption after Sirin retaliates, and Otto alters her memory for a history that benefits only Schicksal.

Following the second eruption, Theresa learns how Cecilia died and gets furious at Otto, plotting with Siegfried, who had returned for his daughter, to retrieve Kiana from Otto's clutches. However, Otto had determined that she would do this, and intercepted her. The result of the quarrel led to Siegfried escaping with K423 and Otto claiming that he had retrieved Kiana. Due to Kiana being in Otto's captivity, Theresa cannot leave Schicksal, but she instead, puts in a request to be transferred to the Far East Branch and establish a school for valkyries there named St. Freya High, on June 21st, 2009. In February 2014, when the Nagazora incident happened, Theresa realizes that "Kiana" was amongst the trio of surviving kids and herrscher, from the city after Murata Himeko confronts Raiden Mei. After their meeting, Theresa convinces Kiana to join St. Freya High. It is only until some time towards the end of the year, with the events of AE Invasion, that Theresa realizes the Kiana she has in her care is actually K423, when Dr. Einstein speaks to her privately in the underground church. This gave her the knowledge that the Kiana was a clone even before the story began, and despite this, Theresa continues to shelter her against Otto, even springing her rebellion at the Battle of Schicksal that occurs in Chapter 7.