Where's the Rest?
This article is a stub. You can help Honkai Impact 3 Wiki by expanding it.
Vill V 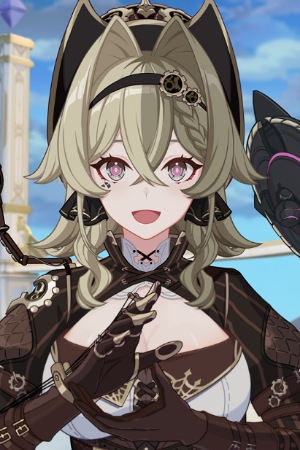 Vill-V (Japanese: ヴィルヴィ Viru-Vi) was the 5th Flame Chaser and the creator of at least three divine keys (the 2nd, 4th, and 5th). and the head of the MOTH's Engineering Department at one point. She has also manufactured artificial body parts for Mobius before, unaware of Mobius' intentions for doing so,[3] she also the youngest master and owner of Helixcraft, and the inventor of the Kevin Killer.[4]

She claims to be capable of partitioning her personality into different personas with their own unique function.

She claims to have partitioned her personality into eight different personas: "Vill-V", The Mechanic (sometimes referred to as "the Expert"), The Magician, The Occultist, The Chef, the villain, Kevin Killer Mk 5, and her original self.[5]

One of her recollections features an internal conversation between the Expert, the Magician, the Scholar, Model Five, and Vill-V. However, Vill-V claims that these kinds of conversations only happen rarely.

Not much is currently known about Vill-V’s backstory, however, it is known that she currently resides in the Elysian Realm.